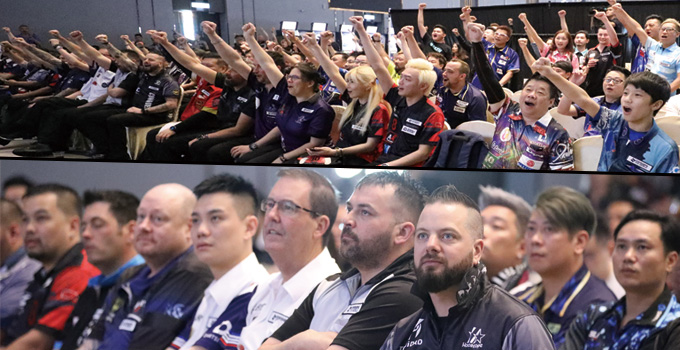 Can any other tour tournament dazzle darts fans all over the world this much?
"THE WORLD" has top players for all of its stages all year round. The season opener, STAGE 1 took place in Malaysia on 28 April. Who will be this season's champion? Moreover, who will earn the right to play in "SUPER DARTS 2020"? Players who rank top 4 in THE WORLD 2019 Annual Ranking will be given a seeding spot in SUPER DARTS 2020. At the first regular stage of the season, players were up for their game and the atmosphere was filled with energy and excitement.

"I have played my best to win STAGE 1 after the victory of the Hong Kong team so as to bring more joy to Hong Kong players" Royden Lam said after STAGE 1. Lam is the winner of "THE WORLD GRAND FINAL" in 2018 and contributed greatly to the victory of the Hong Kong team in "SOFT DARTS WORLD CUP 2019" that was held one day before STAGE 1. Lam grabbed 2 consecutive victories as a member of the national team and as a single player. He carried the momentum and won Pretournament Round Robin to advance further.
In the Quarter Final, he competed against Leonard Gates of the U.S. They tied 2-2 and entered the final leg where Lam needed to give the advantage of first thrower to Gates but the Hong Kong player turned the close game around to his advantage and advanced to the Semifinal. Lam competed against Jose Justicia of Spain in the Semifinal. Justicia took the 1st leg, but Lam got the rest. Especially noteworthy was Lam's 5 round 15-dart finish in 701 in the deciding 4th leg.

The final was between Royden Lam and Boris Krcmar. Enthusiastic fans may remember this match-up where they competed in 2 consecutive tournaments: the GRAND FINAL and STAGE 5, the concluding stage of the 2018 season. They had each won and lost a match. Therefore, the match this time was drawing special attention.
In the 1st leg, Lam didn't give Krcmar a chance and completed the game in the 6th round. Lam took the momentum and broke the game with slightly higher STATS than Krcmar. Lam took advantage of being the first thrower in the 3rd leg and won 3 consecutive legs which made him the winner of the match.
"I am so happy to win STAGE 1 right after winning the WORLD CUP. I am so grateful as many fans, friends, family, and my partner are supporting me. My dream is to win all stages of THE WORLD. I want to win more stages than last season in order to achieve my goal" Lam commented after obtaining his 4th stage victory since STAGE 6 in the 2012 season. 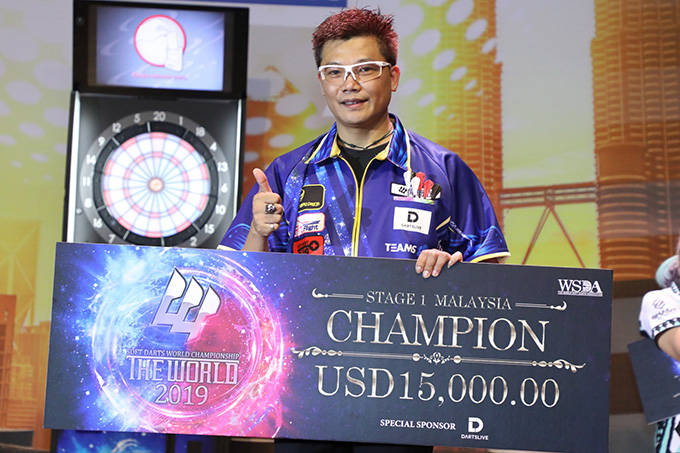 Love and passion for darts drives Lam ever higher

Winning both STAGE1 and "SOFT DARTS WORLD CUP 2019", Lam has had a good start in the 2019 season. It was not easy. He has been under a lot of pressure and stress.
"I had a serious back injury a couple of years ago. I am playing through the pain. Before a match, I try to relax, focus and pretend that I have no pain. Luckily I was able to compete in my battles without yielding to the pain."
Not escaping from the pain but confronting it has been his strategy. That's what it's taken for him to reach the top." I don't think about winning or losing. I focus on how I can play my best to thrill the audience. The only thing I can control is my performance. I play my best in each game. That is the only thing I care about. So don't think too much about your game results, play your best and enjoy the game."
Lam gives his all to fans. Can he keep winning and become this season's champion as he wishes?

Eagerly awaited STAGE 2 is set for 16 June in France. Watch Lam's performance as well as matches by other great players on the LIVE webcast!
http://darts-theworld.com/en/