As an important game capping the first half of the season, the World 2017 STAGE 3 was held in Taichung on Sunday July 30.
Top 4 players in the annual ranking were given a ticket to "SUPER DARTS 2018" this season.
In a situation where all players want to improve their rankings as high as possible for the second half, Prussian Arceno, a Filipino player, won first place.

Dark horse in STAGE 3! The name is Prussian Arceno 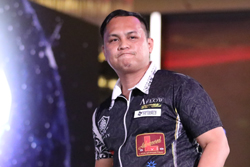 Prussian Arceno, who participated in STAGE 2 for the first time in 2013, has been participating in THE WORLD on a spot basis.
He won the WILD CARD TOURNAMENT and participated in the GRAND FINAL in 2016.
Though he lost the first game, he made an impressive performance showing he had been absolutely finding strength.
He participated in STAGE 3 for the first time this season. Getting through the qualifying round without losing any leg in the qualifying round-robin, he won the right to compete in the final round with his momentum.
In the quarterfinal game, he faced off against Paul Lim, who was in first place in the point rankings. Closing with Lim until the final leg, he won finally took advantage as a first player.
In the semifinal game, he faced off against Cyril Blot, a French player. Though he made the second move, he came close to winning breaking Legs 1 and 3.
In Leg 4, he won without losing the lead throughout the game. He secured a place in the final, which was the first time for him. 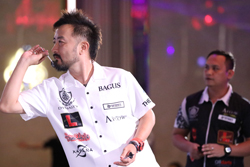 In the final, he faced off against Kenichi Ajiki, defeating Harith Lim, the second player in the annual ranking, in the semifinal.
A very close game was predicted for the final as Ajiki was building momentum in STAGE 3 as another dark horse.
In the first leg, Arceno, playing first, took advantage and won in Leg 1.
In Leg 2, while Ajiki got 4 marks in 20, showing a painful start, Arceno succeeded in taking the initiative by getting 9 marks in T19-T-19-T20.
Showing stable play without handing him a come-from-behind win, Arceno broke Leg 2.
In Leg 3, grasping the flow of the game perfectly and keeping the advantage of playing first, he won spectacularly in straight sets, which was his first win in THE WORLD.
Showing his overwhelming strength in STAGE 3, Arceno was listed 29th. How high will he rank with future great success in this game? Arceno is attracting the attention of fans around the world.

STAGE 4 as the opening of the second half of 2017 will be held with Nippon Darts Festival 2017, Japan's big soft darts event on Saturday August 19.