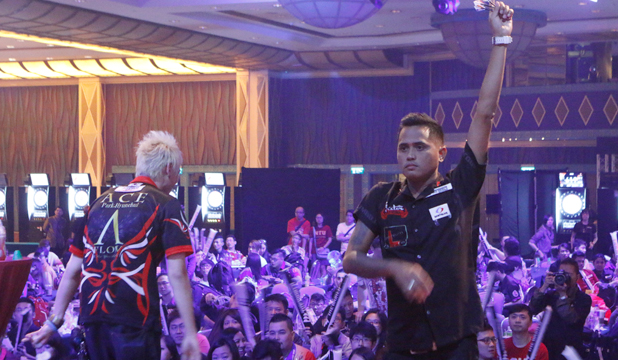 Park Hyun Chul and Lourence Ilagan competed in the final at THE WORLD 2015 Macau on Apr. 5.

When I saw them just before the start of the match, they were as different as night and day.
Sharp-eyed Ilagan was warming up throwing darts alone quietly. Surrounded by many people, Hyun Chul was showing his excitement from beating his tough opponent Paul Lim.

Ilagan who is considered as one of the strongest in Asia advanced to the final after defeating toughest players such as Kenichi Ajiki of Japan, Leonard Gates and Darin Young of the US. His performance perfectly fits his reputation as the strongest in Asia. Meanwhile, this is the first final of THE WORLD for Hyun Chul. He defeated the world's top players including Paul Lim, the champion of SUPER DARTS, Boris Krcmar who posted the world's record hitting 58 consecutive Bulls at BULL MASTER on the previous day and Adrian Gray, a UK player who is ranked higher than the Korean player. In the final, Ilagan had kept momentum going on the day and upset Hyun Chul who had been enjoying good wins on the day. Ilagan didn't win any title last season. But he showed his return with this victory as well as his winning at SUPER DARTS WILD CARD TOURNAMENT. We can expect more from the Philippine player this season.

STAGE 2 Singapore will be held on Sunday May 24.