In THE WORLD 2017, fierce battles will occur in all of the 6 stages. Paul Lim from Singapore who won the STAGE 2 is currently keeping the lead in the annual point ranking. Alex Reyes from the U.S. who won the STAGE 1 for the first time in almost one year ranks second by a narrow margin at present, and Harith Lim who had an intense battle with Reyes ranks third. However, they just finished the early stage in the 2017 season. There is no doubt that the battles to become a champion in the year will get increasingly fierce depending on the future development including the STAGE 3, which is starting soon. Let us introduce the featured players who are likely to participate in such battles. 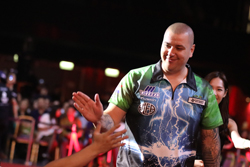 He ranks first in the annual rankings in 2014 and 2015. In the 2016 season that he challenged the third consecutive victory, Krcmar gave up the lead to Paul Lim by a narrow margin, but won the GRAND FINAL and reached the top of the world. Krcmar has been sluggish in this season as he is in ninth place at the moment, but for him, it is too early to get flustered. Although Krcmar did not do well in the first half in both the 2014 and 2015 seasons, he regained lost ground in and after the middle of the season. Therefore, the current situation may be rather normal to him. At the same time when the bustle of the fight for the first place starts to increase, the absolute champion will awaken. 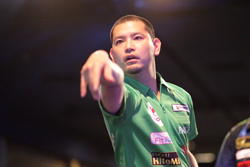 Eguchi participates in THE WORLD as one of top Japanese players. Although he has never won the stage championship, he is actually a leading player who keeps being in the top ten in the annual rankings every year since 2012. There may be many people who know how strong he is as he almost defeated Paul Lim in the opening match in SUPER DARTS 2017. Currently, Eguchi is in fourth place and if he gets a chance to score big points, he will be able to move into the lead at once. When he wins the stage for the first time, he will start to advance steadily!

Royden Lam, a strong player who is familiar with THE WORLD 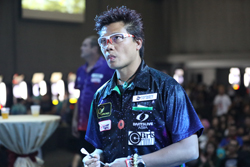 As a top player representing Hong Kong, Lam has been active in THE WORLD since the first year. With his experience of winning the stage championship twice in the past, he is such a strong player who is familiar with how to compete in THE WORLD more than anyone else. Currently, he is in seventh place, but there is no doubt that he is the one who will pose a threat to the high-ranking players. As far as we see how he has been competing in the matches in this season, his ranking is likely to further get higher in and after the middle of the season. 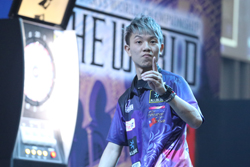 Winning the second place in STAGE 5 in the 2016 season, Tsai attracted lots of attention at a bound. He earned a place by fan balloting to participate in SUPER DARTS 2017. Although he lost in the first match, he made his name famous as one of the players representing the world. So far he has been sluggish as he is still in the 35th place in this season, but the STAGE 3 will take place in Taiwan where he grew up. He will receive strong support from his fans and probably rank high.

We are in the middle phase of THE WORLD 2017, which is increasingly filled with highlights. Will Paul Lim keep running far ahead of others, or each country's strong player follows him to take over the lead? Whether or not the players who have been sluggish will be able to get high in the ranking is also the point that you cannot miss. The STAGE 3 that draws attention will be held in Taiwan on Sunday July 30. Let's watch the fierce matches broadcasted live by DARTSLIVE.TV!