THE WORLD is the one and only tournament tour of soft-tip darts that draws outstanding players from across the globe. As its season opener, STAGE 1 was held in Las Vegas, U.S.A. on Saturday May 13.

The 2017 tour consists of 6 stages and the participants compete to earn points for the Annual Ranking. The top 4 players in the ranking will be invited to play in the supreme competition, SUPER DARTS 2018. Players were filled with energy and enthusiasm in this season opener to get head start on the race and the seeding of SUPER DARTS 2018 in the end of this season.

The U.S. star aiming to conquer THE WORLD!

Paul Lim of Singapore and Boris Krcmar of Croatia engaged in an intense battle over the top ranking position to the very end of the last season. The 2 competed in the 4th round (Best 16) in this STAGE 1, and Lim advanced to the Best 8 after their fierce match. The Singaporean player faced Alex Reyes of the U.S.A. in the Semi-Final. 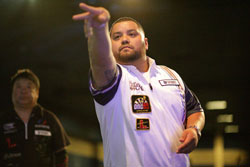 Reyes made his name known as the STAGE 2 champion of THE WORLD 2016 and took the 3rd spot in the 2016 ranking although absent from the champion title since. Reyes had been making steady progress while peoples' attentions were on Krcmar and Lim. Reyes took the 1st and 4th LEG. The deciding LEG went to Reyes who took a lead after hitting 9-mark in the 2nd round and didn't allow Lim any respite to turn this around.

A Singaporean star to leap forward! 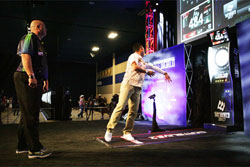 Lim joined THE WORLD from its starting year, 2011 and he achieved his best in 2016, 10th in the Annual Ranking. The Singaporean player has never been Stage Champion, but his meticulous performance makes him one of the strongest challengers for the title of the world champion.
In the Semi-Final, Lim threw first and took the 1st LEG with a huge point lead. In the 2nd LEG, he threw second but hit 9-marks: T19-T19-T20. Young couldn't stop Lim's winning momentum. The Singaporean player went on to the Final for the first time taking first 3 LEG from the U.S.A. veteran player.

Reyes surging to conquer THE WORLD

Alex Reyes and Harris Lim fought each other in the Final. For the first 2 LEG both unable to break the LEG. The first critical moment came in the 3rd LEG. Lim threw first but turned out 3-mark on 20 while Reyes hit 9-mark: T19-T19-T20. Reyes led the game and took the 3rd LEG. The U.S.A. player threw first in the 4th LEG but failed to finish remaining 66 points in the end. Lim narrowly took the LEG. The match went on to the final LEG.
In the deciding LEG, Reyes threw first and extended his lead by hitting 9-mark: T20-T18-T20 in the 3rd round. Lim couldn't turn this around and the tile of the Stage Champion went to Reyes. This is his 2nd Stage Champion title in 1 year. 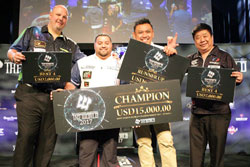 Will Alex Reyes continue to add to his point lead leaving other players behind? Are we about to see Harith Lim becoming the stage winner for the first time in the coming stage? We can't wait to see the dramatic matches in the next stage.

THE WORLD 2017 STAGE 2 is scheduled in France on Sunday June 18. This stage will be webcasted live. Don't miss the exciting stage!